Practicing Ankle Stability After a Sprain

|
In Ankle Pain
|
By FrankCawley

The ankle is a “hinge or gliding” joint made of bones and several ligaments at the end of each leg. Due to the composition of ligaments, ankle injuries can take a long time to heal. Ligaments have low vascularity which means that there aren’t many arteries or veins to provide blood flow to these components. Blood is needed for the body to make new cells and repair injuries. When you run, jump, and spin, your ankles take on forces that can equal up to several times your body weight. When stability is compromised, the force that can be supported greatly decreases.

Brief Anatomy of the Ankle

The ankle is made up of two joints, three bones, and several ligaments that connect bone to bone. 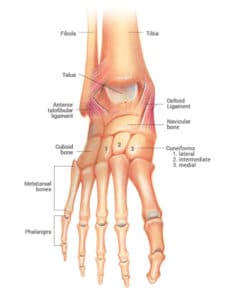 How to Identify a Sprain vs. a Strain

The main difference between a strain and a sprain is that a strain affects muscles and tendons and a sprain affects the ligaments. Muscles are located deep inside the leg, often used to protect and stabilize bones, working symbiotically, and tendons connect muscles to bones. Ligaments provide added mobility and stability to bone structure and they connect bone directly to bone.

A sprain is usually due to a single event of acute trauma. It affects ligaments and injuries range from overstretching the ligaments to tearing them completely. A strain often occurs due to repeated overstretching or even tearing of muscles and tendons. Strains are common among athletes. While both strains and sprains present with ankle swelling, localized pain, weakness, and instability, the treatment for either is very different. Improper treatment can lead to further injury and future chronic conditions. 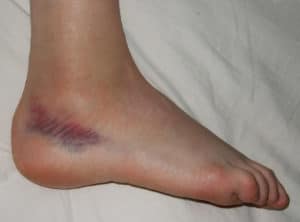 The ligaments of the ankle stabilize and provide movement for different parts of the ankle. Each type of sprain affects a different ligament. Understanding how the sprain affects the specific part of your ankle is important for knowing how to treat the injury. Generally speaking, the more ligaments that are involved and the more they are stretched or torn, the more ankle instability will occur. A sprain can happen with irregular motion or acute trauma.

Loss of Stability After a Sprain

The overstretching or tearing of ligaments when a sprain occurs causes loss of stability in addition to pain, swelling, and weakness at the site of injury. Since ligaments have low vascularity and take a long time to heal, they will likely never be as strong as they were before the injury and improper care after the injury can lead to chronic conditions that cause further loss of stability. When a sprain happens, the stress affects bones, muscles, cartilage, and joints. After the injury, sometimes even years later, stiffness and inflammation in the joints are known as post-traumatic arthritis. Improper exercise and conditioning after an injury can lead to tendonitis which is an inflammation of the tendons at the connecting bones to muscles at the ankle.

All types of arthritis include cartilage wearing down between bones and subsequent inflammation. Post-traumatic arthritis is a precursor to osteoarthritis, a degenerative disease that occurs with age. If chronic conditions begin early on due to injury, the result may be joint replacement or other surgery. Physical therapy and proper treatment of an ankle sprain can prevent excess loss of stability or the need for surgery. 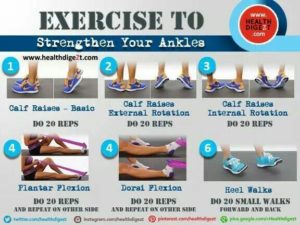 Treatment for an Ankle Sprain

If you suspect an ankle sprain of any kind, it is important to have it diagnosed and treated as soon as possible. Your doctor may recommend the R.I.C.E. protocol, which stands for “rest, ice, compression, elevation” in a cycle for the first couple of days following a sprain. After that, physical therapy exercises may be used to restore stability and recover the ligaments that were injured.

Your physical therapist will use a number of exercises to stabilize your ankle and help the ligaments heal after a sprain. The ankle works in conjunction with many different muscles, joints, tendons, ligaments, and bones in the leg and foot. A kinetic chain refers to the way these components affect each other while they move. Open chain exercises involve the foot being able to move freely, like how the lower leg swings up while using a leg curl machine. Closed chain exercises involve the foot in a stationary position. Lunges, squats, and push-ups are examples of closed chain exercises. Some common strengthening and stabilizing exercises include:

When you’re cleared to begin bearing weight on your injured ankle, a compression sock, ace bandage, or other stabilizing braces may be used during athletic activity to add some stability while rehabilitation is ongoing. These assistive devices allow you to move and exercise an injured ankle with less risk of further injury. Ask your doctor if physical therapy would be helpful so that a professional can help you make sure that you’re doing your exercises correctly and safely. With proper treatment, ankle stabilization and rehabilitation after a sprain are possible. If you are seeking physical therapy services, or have questions about your ankle, call and speak to one of our doctors at 570-208-2787 or e-mail us at cawleyptfrank@gmail.com. We’d love to help!

Our doctors of physical therapy in NEPA are ready to get you up and moving like you used to. With seven convenient locations, your road to recovery starts today!